Want to party like a rock star? Oh who doesn't? Looking for good teen birthday party ideas, at least for that last party before they stop wanting you to plan them at all? If you have a teen rock fan with an upcoming birthday a rock star party may be the rockin'est way to their head bangin' hearts!

How to Host a Rock Star Party

When the guests are arriving either greet them with photos like they are being greeted by adoring fans or rush them inside like you are a tour manager, herding your band into the concert hall. Keep the persona up with dark glasses and a fake ear piece.

Guitar decorations should be everywhere! Look for inflatable guitars, guitar pictures and assorted rock star posters. A strobe light and a fog machine could complete the rock star atmosphere.

Games and Activities for a Rock Star Birthday Party Playing RockBand should be one of the main activities. Other activities could include another popular music themed video game like Dance Dance Revolution. Buy or rent a DVD of the guest of honor's favorite band in concert set the surround sound up to deafen and let the kids feel like they are at an exclusive, small venue concert. Supplies such as paper ware and tablecloths should be covered in guitars and either funky and bright or rock star somber depending on the exact type of guitar music that the teen is interested in. 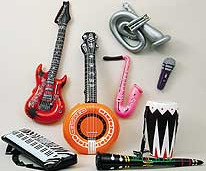 Your guitar party will be completed by favors which could include: guitar themed pins, necklaces or bracelets.
If the party is a small one, consider using rock star or concert tees for each guest.
Another small party idea: gift cards for musical download so the rocking never has to stop.