Party games are used to add fun and excitement to any gathering, and birthday games can be especially fun.

There is a wide variety of games that you can play at a birthday party, and you do not need to be a child to enjoy most of these games. You can have the games for fun, or you can offer door prizes to your party guests that perform especially well. Either way, these birthday party games are sure to be a hit at your next celebration. When playing party games like Blind Man's Bluff, it is important to keep safety in mind. To play the game, you blindfold the guest of honor and then she is spun around a little to throw her off. The rest of the party guests must remain quiet as the guest of honor tries to reach out and grab on to one of her guests.

This is one of the older birthday party games, but it is a lot of fun. You will want to reduce the amount of running around that people do to help prevent injury. People will also have to watch out for the guest of honor's grabbing hands so no one gets an eye poked out.

Donkeys used to be the picture of choice in this game, but you can use a picture of anyone you would like. If there is a particular celebrity that the guest of honor prefers, then use a picture of that celebrity. Instead of a tail, try pinning a moustache, beard or hat on the person's picture. Remember to blindfold the person doing the pinning and spin them around a bit before they try and hit their target. This is a version of Charades, but only one person needs to be giving clues and the entire group can guess. Everyone in the party writes down a celebrity or famous historical figure on a piece of paper and then all of the pieces of paper get folded and put into a box. Then the guest of honor starts off the game by choosing a name from the box. He is not allowed to tell the group the name of the person he is supposed to be. The group asks questions and the guest of honor answers the questions as though he were the famous person. That includes a imitation as well as displaying any famous mannerisms. Once the group either guesses the person's name or gives up, the guest of honor chooses someone new to pick a name out of the box.

The next time you have a birthday party, remember to think of ways that you can entertain your guests and create a party atmosphere. One way to do that is to play some party games. 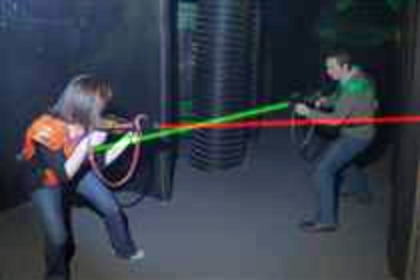